As fall marches surely on towards winter, The T1 Trust continues to make steady progress not unlike that of the changing of the seasons.

A completed steam locomotive boiler operates using tubes that carry superheated gases from the fire in the firebox. These tubes are immersed in water, creating steam and they need to be held in place at each end of the boiler and that’s where the tube sheets come into play. Manufactured by Continental Fabricators of St. Louis, Missouri, the sheet is a sister to the one for the rear of the boiler fabricated last year. It is 91.4 inches (232.2 cm) in diameter and weighs just under 2100 pounds (950 kg). 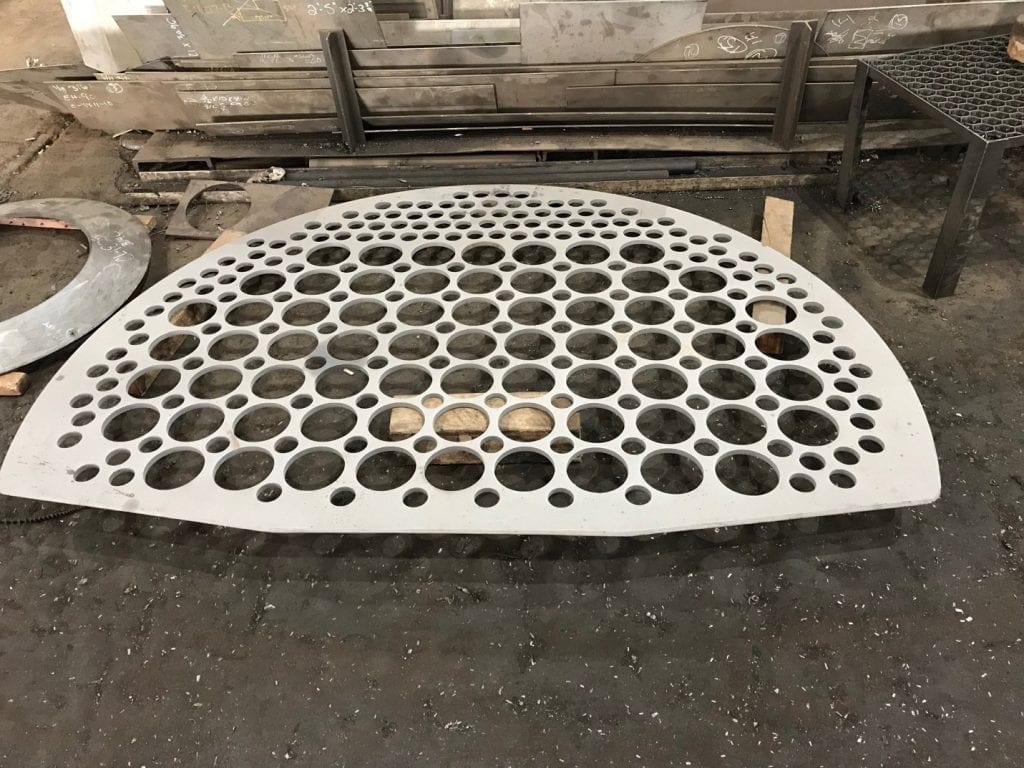 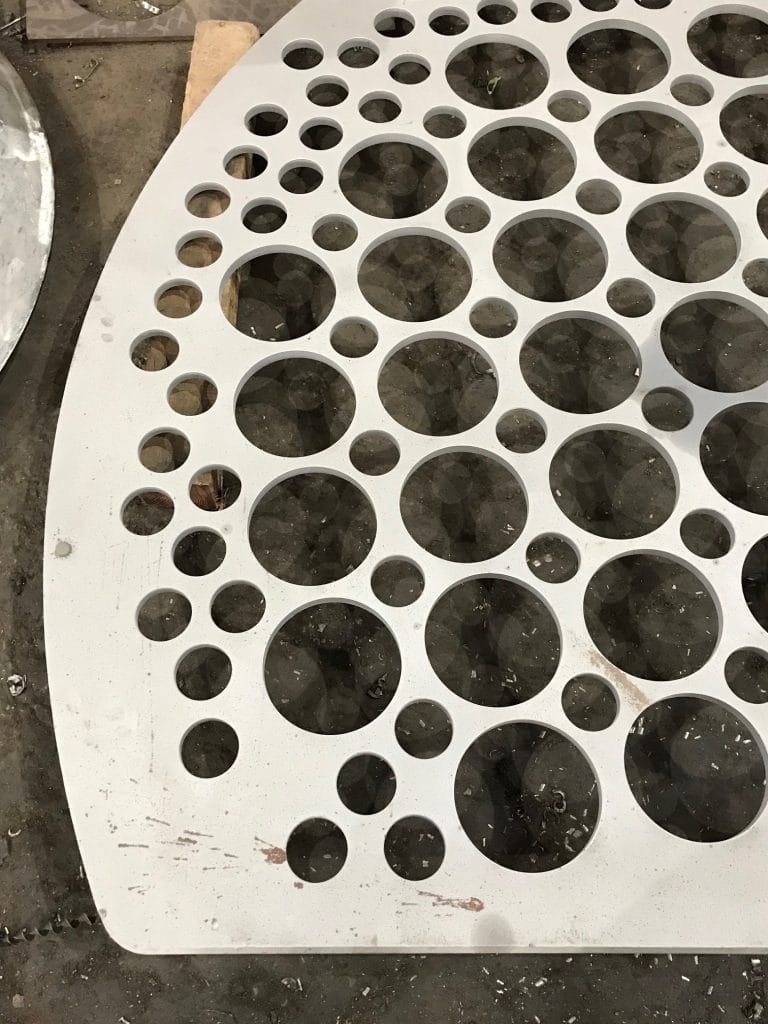 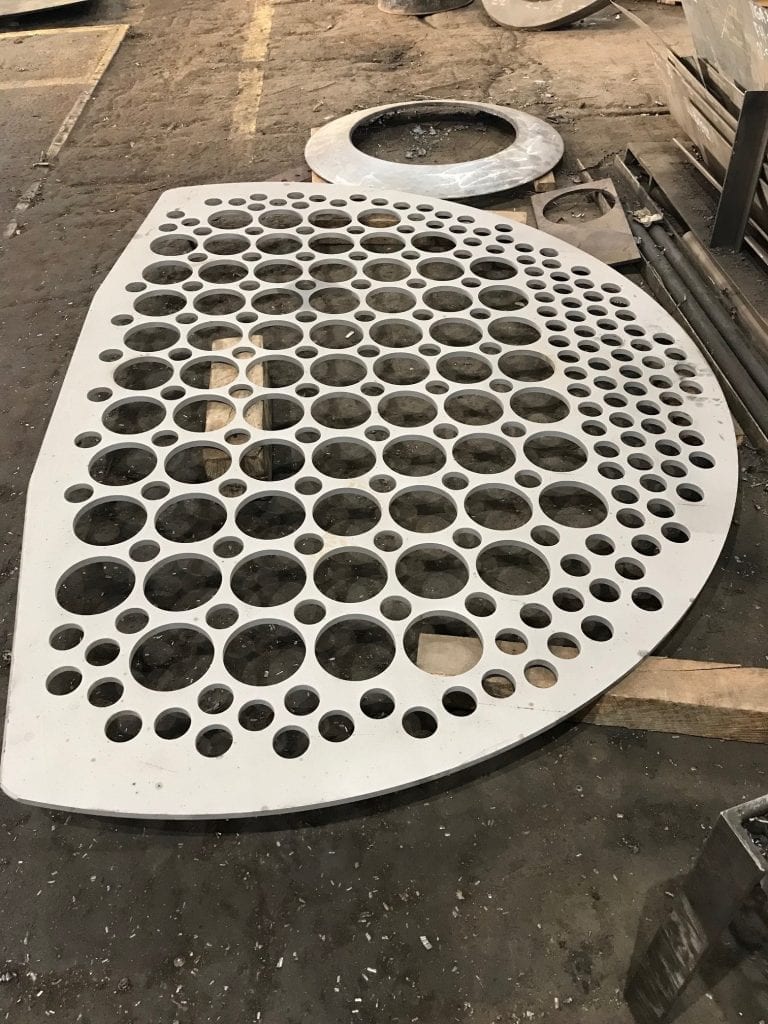 In August, the Trust purchased this Franklin Railway Supply Type B rotary cam worm gear case cover at an estate sale. Extremely rare and quite possibly unique, this type of rotary cam was only fitted two Pennsylvania Railroad locomotives, K4s #3847 and T1 #5500. 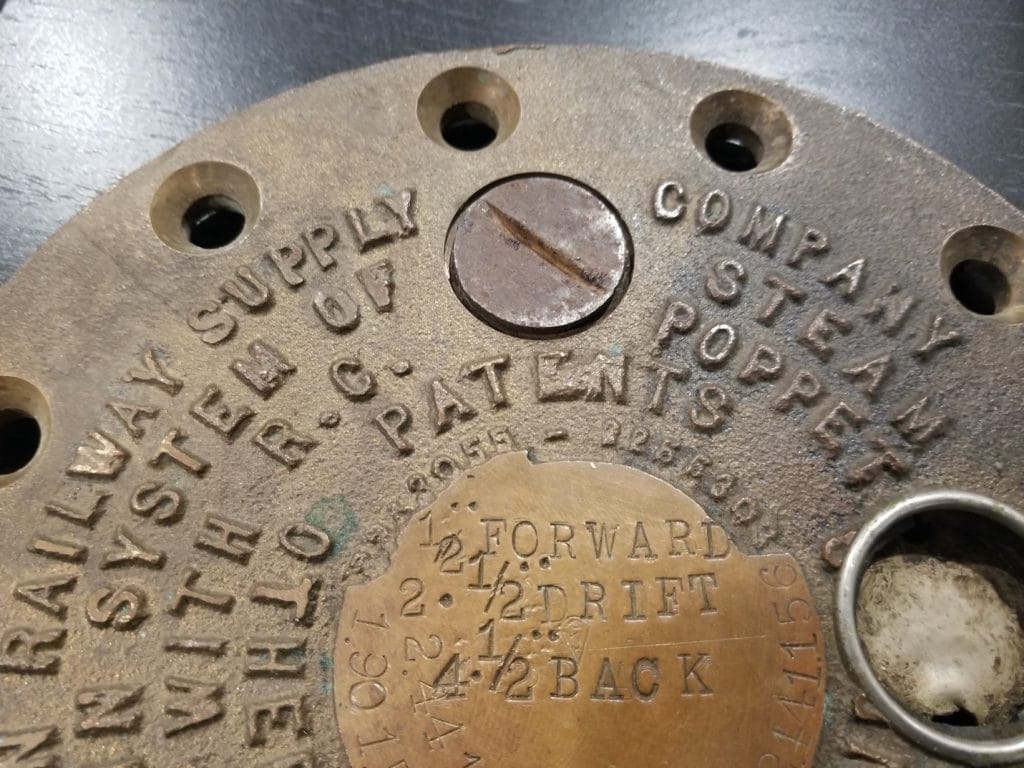 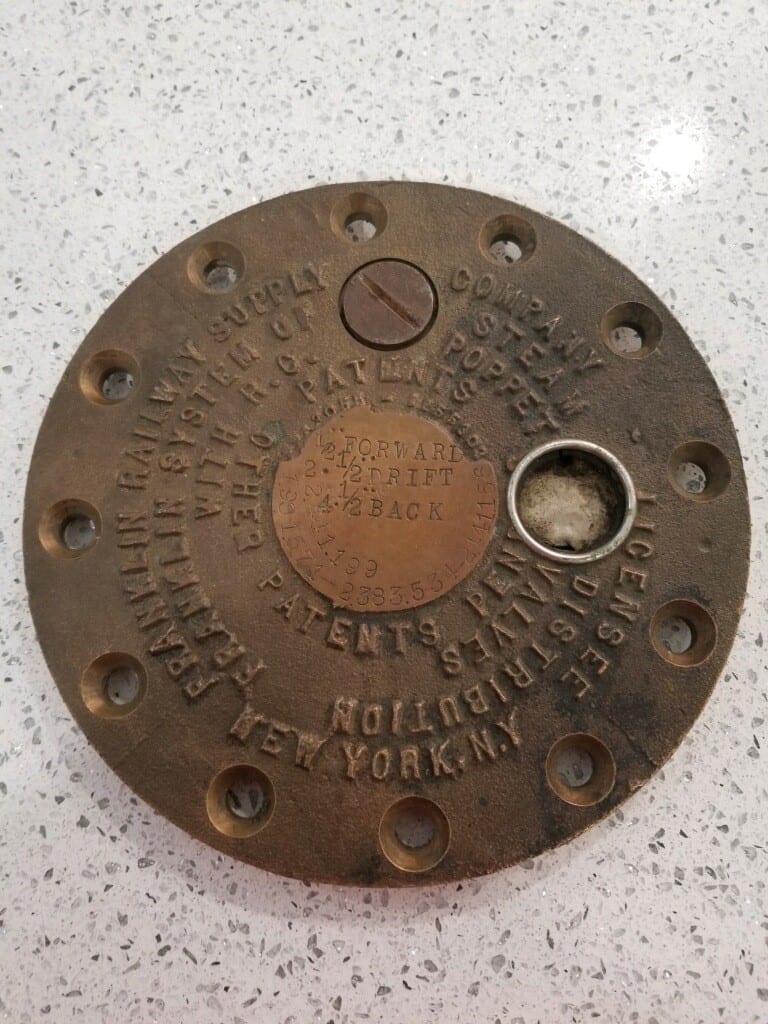 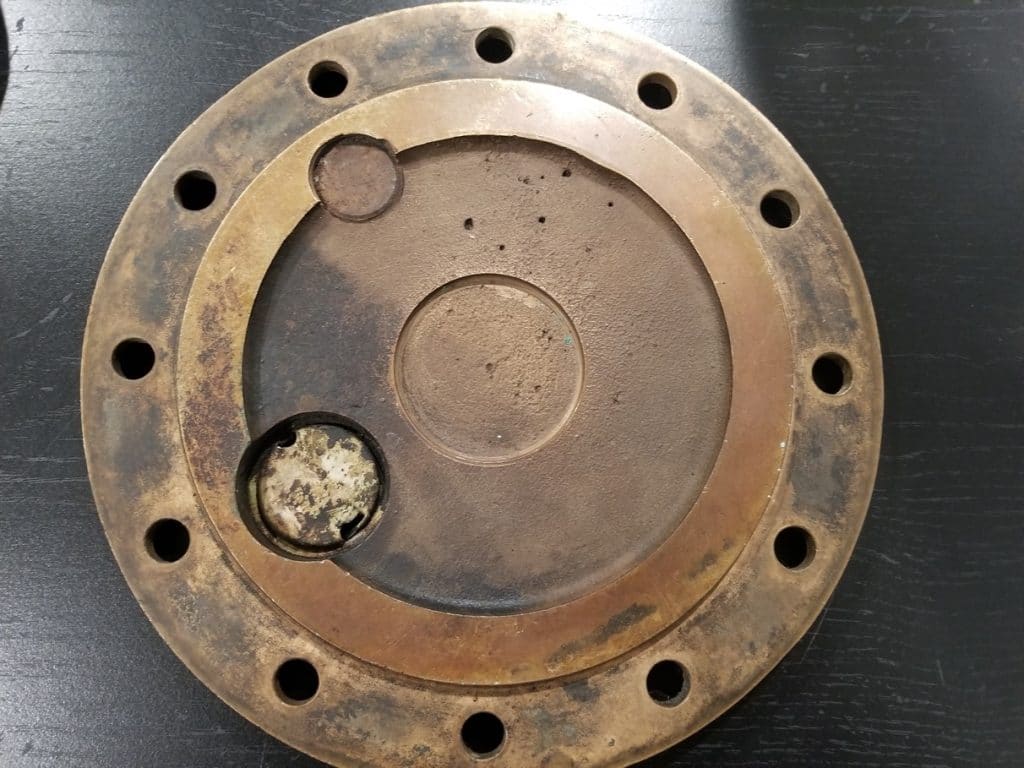 An Interview with Tom Gerstenecker

As long-time supporters of The T1 Trust will know, Continental Fabricators of St. Louis, Missouri has been an integral and invaluable partner in our quest to achieve the impossible. We were fortunate enough to spend some time speaking with Tom Gerstenecker who is Vice President of Sales for Continental.

The T1 Trust:  We would like to thank you for taking the time to talk to me today. Why don’t you go ahead and start out by introducing yourself?

The T1 Trust:  Can you just give us brief history about your early life and how you wound up at Continental and what you do for them.

Tom:  I started out as a draftsman and worked my way up into sales and project management.  works for Nador Corporation for a number of years, then came to Continental thirteen years ago in the sales and got involved with the steam locomotive restoration projects at that point in time.

The T1 Trust:  In addition to steam locomotive preservation, what is Continental Fabricators’ main product line?

Tom:  Our main product line is ASME pressure vessels for the refinery and petrochemical industry. Especially FCC equipment and SRU equipment that your sulfur recovery and a lot of sulfur recovery stuff has boilers and condensers. So, there is section one type equipment and we also do some power plant stuff and you know other miscellaneous projects for people.

The T1 Trust:  So, obviously you’re dealing with projects that have real high requirement for safety and precision.

Tom:  Yes. One other thing you might find interesting is that our ASME-U Stamp is number 27.

The T1 Trust:  Now youll have to explain that one to me.

Tom:  That is our code stamp. I’m not sure who had the first code stamp, but you know if you look at lot of companies, they are up towards four or five hundred.

The T1 Trust:  That is very impressive.

Tom:  So, we’ve had our code stamp for a longtime.

The T1 Trust:  How long has Continental Fabricators been in business?

Tom:  Continental started out as a boiler and stack company in 1903.

Tom:  Then we moved to a couple of different locations and then finally ended up here in the 1940s and we’ve been here ever since.

Tom:  So we were around during World’s Fair which would have been another neat time to have been around.

The T1 Trust:  What year was that again?

The T1 Trust:  So besides the boiler for 5550, what other steam locomotive projects has Continental been involved in recently?

Tom: Recently, we finished 1385 for Mid-Continent Railway Museum. We did a large portion of work on 148 for U.S. Sugar and we did build some parts for Grapevine as well as some other smaller projects.

The T1 Trust: All right, and how the size of those boilers compared to the one for the T1 where any of them comparable or some of them smaller?

Tom:  No, they are definitely smaller than the T1.

Tom: That is good.

The T1 Trust: How did you do first learn about the T1 Trust?

Tom:  We learned about The T1 Trust through Gary Bensman at Diversified Rail. It was a couple of years ago, Gary has done some work in our shop and we worked with him in the past.

The T1 Trust: I actually spoke with him about a year ago.  We had him as a guest in one of our newsletter issues.  He is a pretty nice guy. I enjoyed talking to him…he was fun to have.

The T1 Trust:  Most definitely, most definitely. In regard to The Trust, what were your initial thoughts our organization and how do they compare to the way you view things now?

Tom: It is a very interesting project at the start. We did not anticipate our part of the fabrication going to where it is currently today.  We just thought we are doing a couple of courses and that was going to be it, so we are excited to be involved in it and be a part of this thing. It’s going to be a great project when it is done.

The T1 Trust:  I certainly agree. So, in addition to the boiler courses, you have also done the tube sheets, correct?

The T1 Trust: What was that fabrication process like?

Tom:  You know we have got all the parts made currently in the shop and we are just getting ready to fit things up and start welding out the tube sheet parts. So it is probably another three or four weeks from completion.

The T1 Trust:  That’s the thing about a project like this.  You’re kind of in it for the long haul.

Tom:  Yes, yes and then we just quoted the smoke box and smoke box transition piece the other day, which I understand may be funded soon.

The T1 Trust:  Okay. What do you see being The T1 Trust’s greatest assets from your point of view?

Tom: Aside from the history I think it’s the people that are involved. You know there is a lot of knowledge base there and there appear to be lot of people who really care about this thing and so it looks like it going to succeed.

The T1 Trust:  I have been with them since almost the very beginning and you know its kind of, it has been a bit of surreal ride, you know just from the very start with people telling us this is impossible and you’ll never make it. But for me the coolest thing about this whole business has been not only the dedication suppliers such as yours and all around the country, but the ability we’ve had to tap into that history.  When we were first getting started we were pulling all of the drawings, I was sent out to Harrisburg to meet up with the guy at the Pennsylvania State Archives. He showed me the room where they kept all of the Pennsylvania Railroad drawings that they had collected over the years. We picked out a box that had some T1 drawings in it and I asked him, “Who came into look at these before us?” He told me nobody had, so the drawings have been rolled up since 1947. Nobody had touched them and I tell you seeing those like the papers are just massive and just an incredible thing.

Tom:  I can only imagine that.  You do not know the whole thing is interesting about these projects that this country had such technology and expertise to build these things back in the day.

The T1 Trust:  Absolutely, I mean it was no computers, it was guys with paper, pencil, a slide rule and a ruler.

Tom:  Yeah, that is what is most intriguing about them.

The T1 Trust:  It is just amazing to see. I love clever mechanical solutions to problems, I think it is always fascinating because you know you present ten people with a problem, you’ll get ten different ways to solve it.

Tom:  That is right. That’s what we do, a lot of brainstorming here when we have a problem, sitting around the conference room and sometimes it’s the off-the-wall ideas that the work the best.

The T1 Trust:  Well, what you do think the greatest challenges that the Trust faces and how do you think they might best be overcome?

The T1 Trust:  We can skip that one of you if you prefer.

Tom:  Ya, I really do not I mean I would say initially its just funding of it, but you know on the other hand with the economy is good as it is and lot of people have some money to throw around.

Tom:  That may not be your hurdle.

The T1 Trust:  Let me see here. Is there any other advice you would give to the T1 Trust.

The T1 Trust:  Right there with on you that. Well do you have any questions from me?

The T1 Trust:  Okay, well I really appreciate taking the time to talk to me.  It took a little while for us to kind of get a time that was mutually beneficial, but was nice speaking with you, really appreciate the work that you guys are doing for us getting a quality product and building it you know right here in the USA I think that is part of what makes this a really fantastic thing.

Tom:  Right. If you’re ever in Saint Louis, please stop by.

The T1 Trust:  I would love to. I’d love to see what you guys have made. I’ve seen some of the pictures from the tour they did. I think it was probably last year and you had an open house. It wasn’t necessarily for the Trust, I think it was for something else.

Tom:  Oh through the National Historic Chapter of Saint Louis.

Tom: We do that and honestly then there’s people that just walk in off the street that have her heard through the grapevine that we do stuff. We’ll take them out and show them what’s going on. There’s always something locomotive-wise out in our shop.

The T1 Trust: Well unless there’s anything you need from me, I’ve got a great amount of material here.

Tom:  Okay, do you need any other information, please let me know. I’ll be happy to help you guys out.

The T1 Trust:  Likewise, and again. Thank you for taking the time and if I find myself in St. Louis I will make sure to give you a ring.

Tom:  All right, you too thank you.